Honey is the most popular natural sweetener in the world and the global trade in bee products is worth millions of dollars every year.
Due to its diverse use, the worldwide consumption of honey is so huge that supply can barely cope with demand. Bee products are used in various foods and also enjoy extensive use in several industries including medicine, food processing, industrial manufacturing, and Honey is an impure and supersaturated sugar solution – a natural, original, sweetener. Its unique combination of components makes honey a prized addition to the diet.
It’s popular for its taste and flavor. Due to its natural sweetness and chemical properties, it is preferred over processed sugars and other sweeteners used in baking, beverages, and foods. natural healing.

Top 10 Kinds of honey in the World

Wild honey, the best honey in the whole world, is derived from the Sidr tree before its fruits are dark brown and have a good smell
Different from other types of bee honey in taste and density, and it can keep its quality for two years.

Is no less important than honey Sidr, it is derived from the wild cactus plant, it has a lot of benefits, it conveys all the nutritional properties contained in that plant.

It is derived from citrus trees such as orange, lemon, mandarin, and other trees.
Its color is white and its density is low, containing a high percentage of ascorbic acid.

It is derived from the Wild Keena plant, has a dark color, a good smell, and a unique taste, It has many benefits, it helps in cases of respiratory diseases such as asthma, allergies, It is also used as a spit for sputum, and it also works to maintain the kidneys and helps in detoxifying the body

It is extracted from alfalfa flower, honey contains volatile oils, and also on Covarine, the color is light yellow and has multiple benefits, this type is an energizer of the body and energy.

This honey is extracted from the flower of the sun, and the color is yellow and golden, and when it crystallizes, the color becomes grapevine, has a mild odor, and a slightly tart taste.

It is derived from the flower of the cotton plant. It is characterized by its beautiful smell, delicious taste and light density

It turns white when it freezes, helps to treat anemia.

Extract from the seeds of the black bean has many benefits, and it works to stimulate blood circulation and works to strengthen immunity in the body.

It is very good honey, its color is transparent and becomes white and like the mass if crystallized, and is useful in cases of constipation. 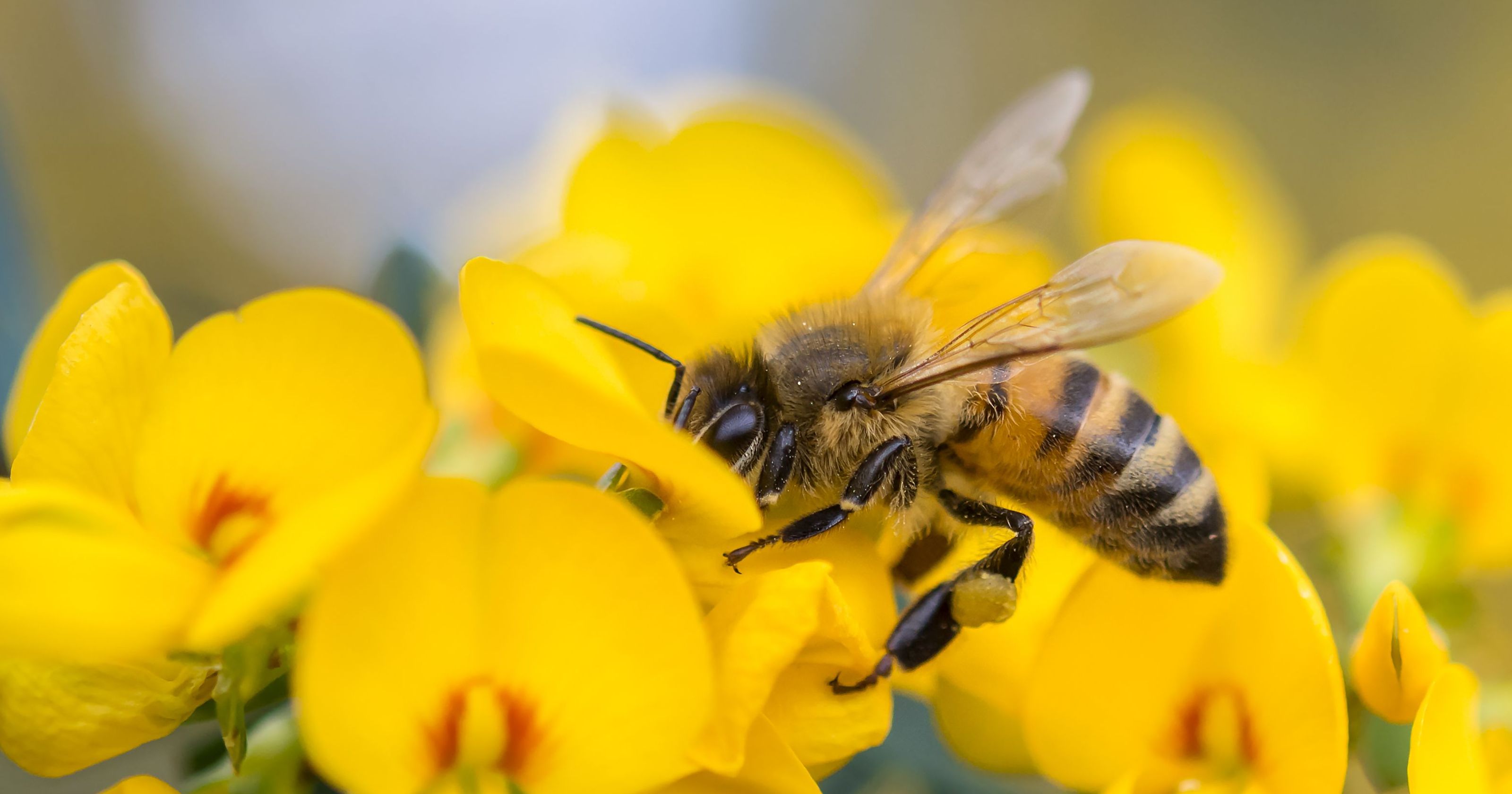 HOW HONEY IS MADE?

An average bee colony produces 60-100 lb (27.2-45.4 kg) of honey each year.
Colonies are divided by a three-tier organization of labor: 50,000-70,000 workers, one queen, and 2,000 drones.
Worker bees only live for three to six weeks, each one collecting about one teaspoon of nectar. One pound (0.454 kg)of honey requires 4 lb (1.8 kg) of nectar, which requires two million flowers to collect.
When the worker bees are about 20 days old, they leave the hive to collect nectar, the sweet secretion produced by the glands of flowers. The bee penetrates the flower’s petals and sucks the nectar out with its tongue and deposits the nectar into its honey sac or abdomen. As the nectar journeys through the bee’s body, water is drawn out and into the bee’s intestines. The bee’s glandular system emits enzymes that enrich the nectar.
Pollen grains attach to the bee’s legs and hairs during the process. Some of it falls off into subsequent flowers; some mixes with the nectar.
When the worker bee cannot hold any more nectar, she returns to the hive. The processed nectar, now on its way to becoming honey, is deposited into empty honeycomb cells. Other worker bees ingest the honey, adding more enzymes and further ripening the honey. When the honey is fully ripened, it is deposited into a honeycomb cell one last time and capped with a thin layer of beeswax. 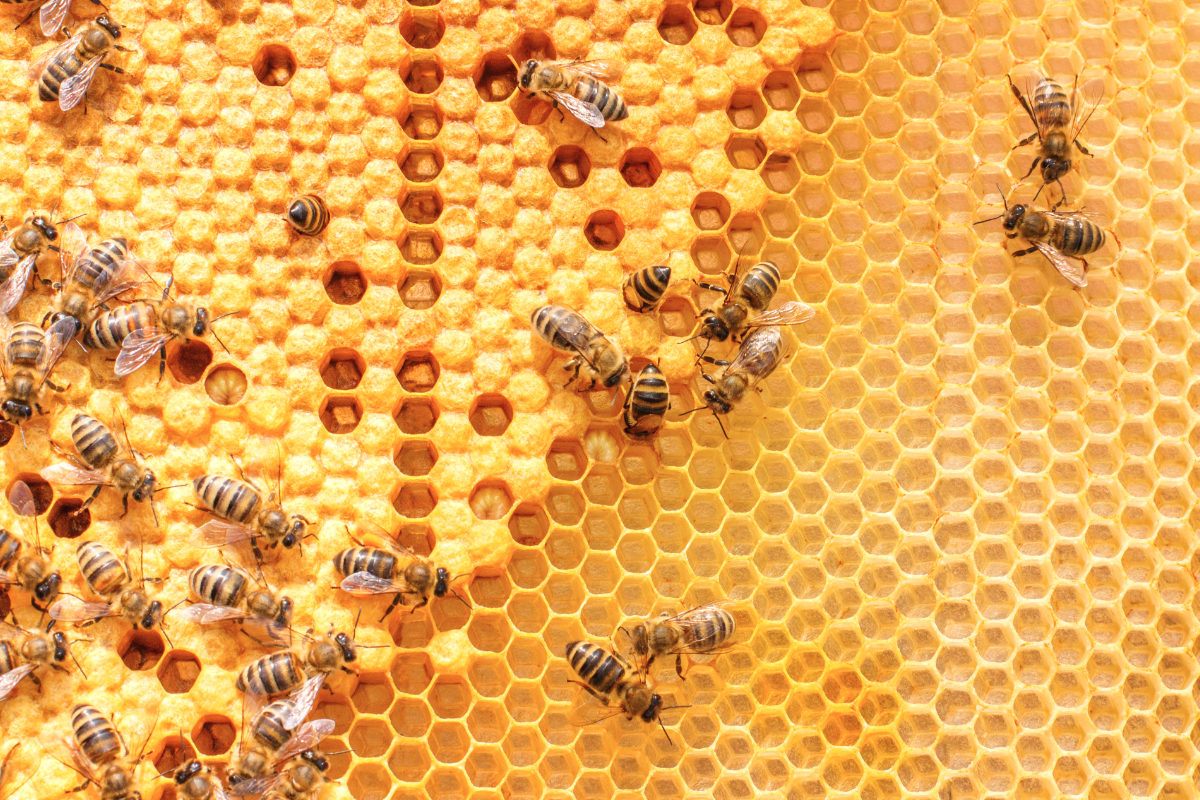 Full honeycombs removed from the hive
To remove the honeycombs, the beekeeper dons a veiled helmet and protective gloves.
There are several methods for removing the combs. The beekeeper may simply sweep the bees off the combs and guide them back into the hive.
Alternately, the beekeeper injects a puff of smoke into the hive.
The bees, sensing the presence of fire, gorge themselves on honey in an attempt to take as much as they can with them before fleeing.
Somewhat tranquilized by engorgement, the bees are less likely to sting when the hive is opened.
A third method employs a separator board to close the honey chamber off from the brood chamber. When the bees in the honey chamber discover that they have been separated from their queen, they move through a hatch that allows them to enter the brood chamber, but not reenter the honey chamber.
The separator board is inserted approximately two to three hours before the honeycomb is to be removed.
The majority of the cells in the comb should be capped.
The beekeeper tests the comb by shaking it. If honey spurts out, the comb is reinserted into the honey chamber for several more days. Approximately one-third of the honey is left in the hive to feed the colony. 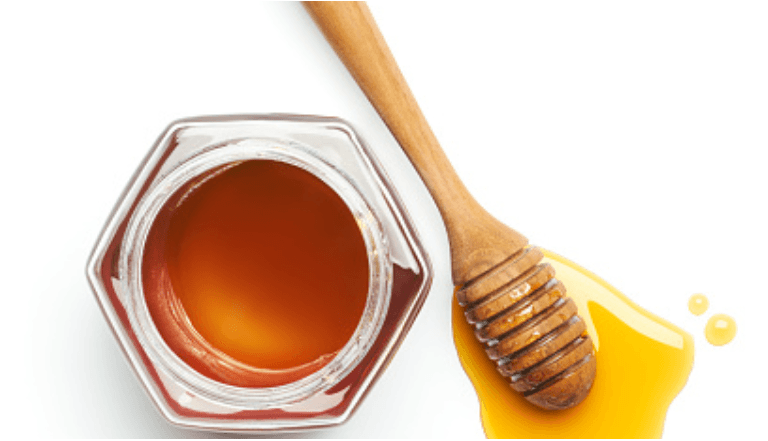 Honeycombs that are at least two-thirds capped are placed into a transport box and taken to a room that is completely free of bees. Using a long-handled uncapping fork, the beekeeper scrapes the caps from both sides of the honeycomb onto a capping tray. 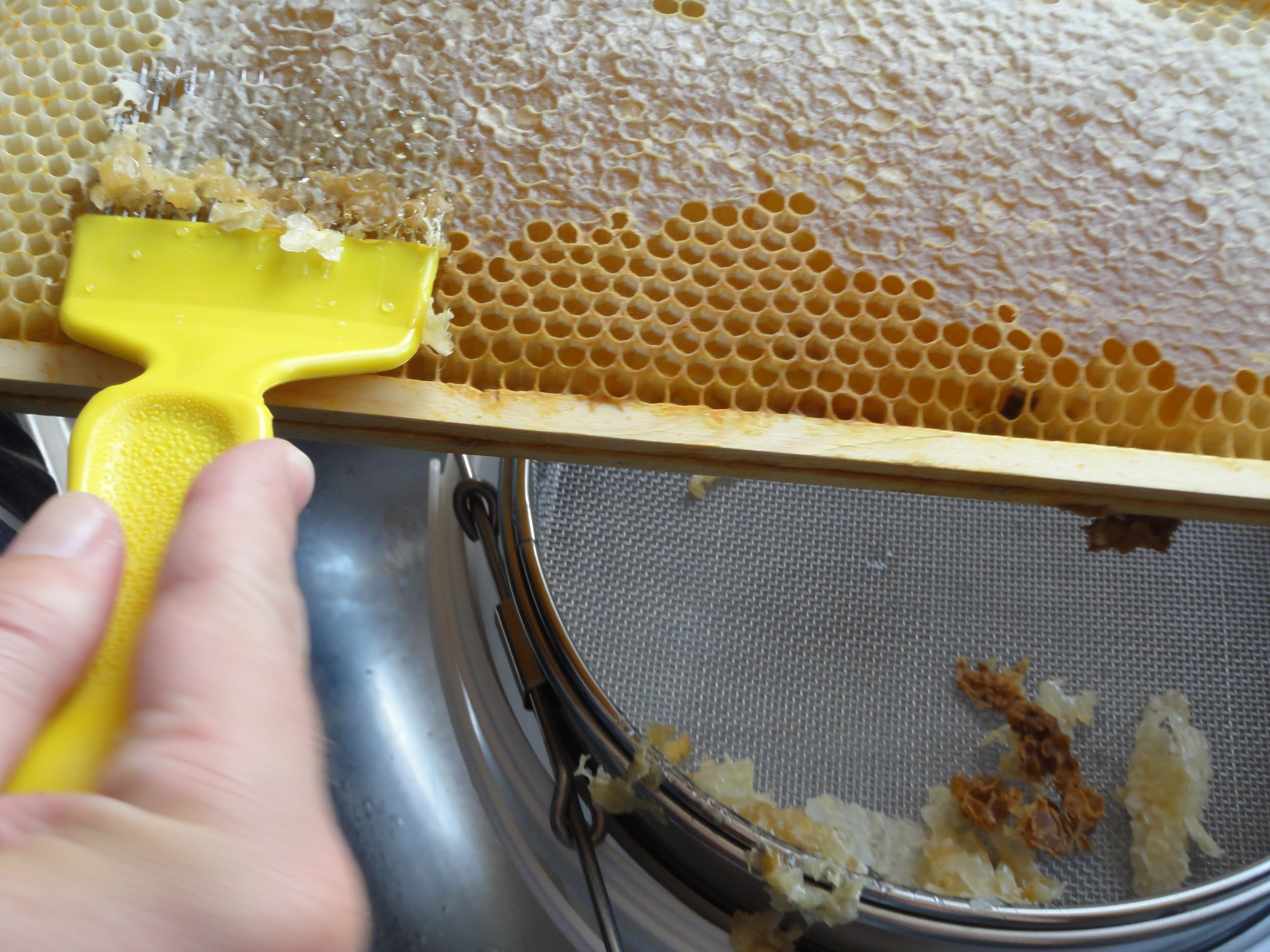 Extracting the honey from the combs

The honeycombs are inserted into an extractor, a large drum that employs centrifugal force to draw out the honey. Because the full combs can weigh as much as 5 lb (2.27 kg), the extractor is started at a slow speed to prevent the combs from breaking.
As the extractor spins, the honey is pulled out and up against the walls. It drips down to the cone-shaped bottom and out of the extractor through a spigot. Positioned under the spigot is a honey bucket topped by two sieves, one coarse and one fine, to hold back wax particles and other debris. The honey is poured into drums and taken to the commercial distributor. 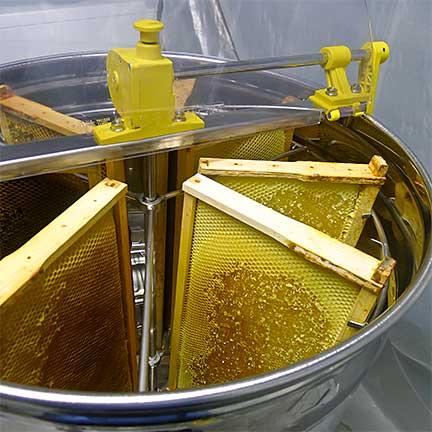 At the commercial distributor, the honey is poured into tanks and heated to 120°F (48.9°C) to melt out the crystals. Then it is held at that temperature for 24 hours.
Any extraneous bee parts or pollen rise to the top and are skimmed off.
The majority of the honey is then flash-heated to 165°F (73.8°C), filtered through paper, then flash cooled back down to 120°F (48.9°C).
This procedure is done very quickly, in approximately seven seconds.
Although these heating procedures remove some of the honey’s healthful properties, consumers prefer the lighter, bright-colored honey that results.
A small percentage, perhaps 5%, is left unfiltered. It is merely strained. The honey is darker and cloudier, but there is some market for this unprocessed honey.
The honey is then pumped into jars or cans for shipment to retail and industrial customers. 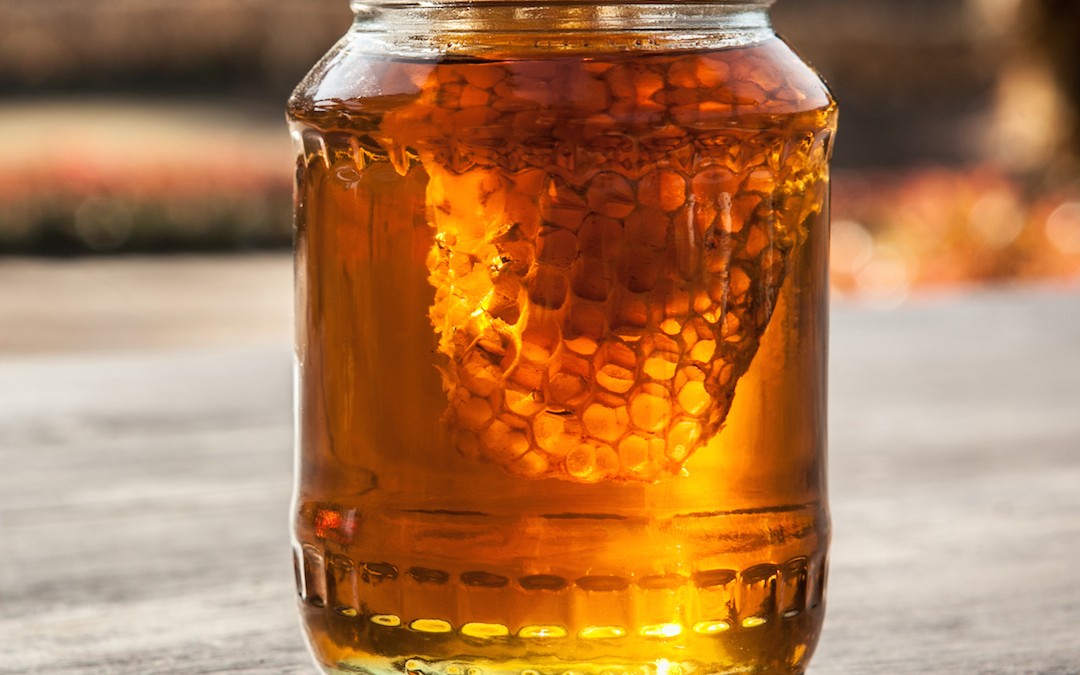 The maximum USDA moisture content requirement for honey is 18.6%. Some distributors will set their own requirements at a percent or more lower. To accomplish this, they often blend the honey received from various beekeepers to produce honey that is consistent in moisture content, color, and flavor.
Beekeepers must provide proper maintenance for their hives throughout the year in order to assure the quality and quantity of honey.
(pest prevention, the health of the hive, etc.) They must also prevent overcrowding, which would lead to swarming and the development of new colonies. As a result, bees would spend more time hatching and care for new workers than making honey.

How you can get the right Packaging and accurate filling machine for your product ?

In order to find the best machine for your needs, consider the following product characteristics

What is the viscosity? What is production Capacity? The chemical composition? Are there chunks?

Where is the machine going to be located? Electricity needed? Electricity consumption? What types of cleaning and maintenance processes are required? Does it need an air compressor?

What type of cap is required? Screw, press-on or twist -off? Is the machine Automatic or Semi-Automatic? Does it require sleeve Shrink? 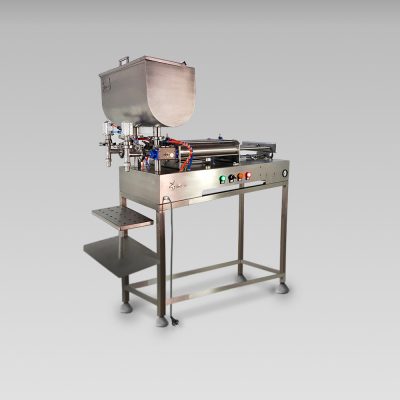 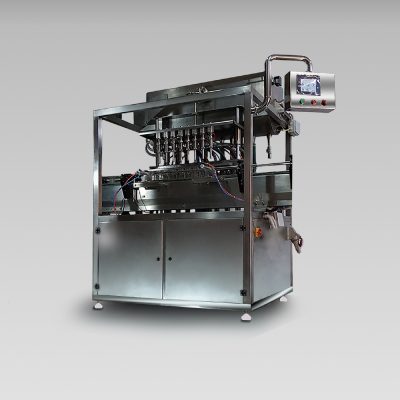