Nutritional values ​​of soybean oil and its benefits for the body 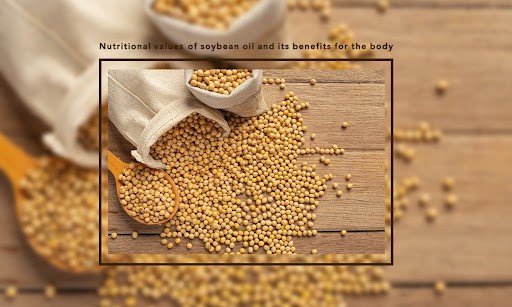 An overview of soybean oil:

Soybean oil is extracted from soybeans (scientific name: Glycine max), which is distinguished by its dark yellow or pale green color. The use of soybeans dates back to the eastern half of northern China, in the eleventh century BC. Approximately 62 million tons of soybean oil was produced around the world during the years 2018 and 2019, and therefore it is one of the most widely used types of vegetable oil, as it is distinguished by its multi-use; It can be used in many cooking methods; Such as: baking, frying, and grilling. Ordinary vegetable oil usually contains corn, soy, palm, and safflower oils.

It should be noted the need to pay attention to the shelf life of vegetable oils; The shelf life of soy oil is estimated at one year, and the oil can be placed in the refrigerator if you want to store it for long periods, but it is recommended to leave it for one to two hours at room temperature after taking it out of the refrigerator when you want to use it; This is to allow the oil to return to its natural consistency.

Benefits of soybean oil due to its nutrient content:

Choosing healthy fats is one of the recommended ways to get a healthy diet, and although a large number of vegetable oils contain high amounts of polyunsaturated fats such as corn oil, soy, and safflower, soybean oil is the only one that provides Both types of essential polyunsaturated fats; It is omega-3, or the so-called alpha-linolenic acid, or the so-called linoleic acid.

A systematic review of a group of studies, published in the journal PLoS medicine in 2010, showed that the consumption of polyunsaturated fatty acids, rather than saturated fatty acids, reduces the risk of coronary heart disease. Studies have focused on the consumption of oils containing omega-3; Such as soybean oil, or canola oil, by consuming 20 grams of soy oil, or 30 grams of canola oil on a daily basis; It will increase the intake of polyunsaturated fatty acids by approximately 5% of the total calories intake per day; Which has been estimated at 2,000 calories per day.

One tablespoon of soy oil can provide approximately 20% of the recommended daily value of vitamin K, which may contribute to supporting bone health, a group of studies published in the journal PLOS Medicine in 2008, involving 440 A post-menopausal woman who suffers from osteopenia, and the results showed that taking 5 milligrams of vitamin K1 supplements daily, for a period of two to 4 years, may contribute to reducing the risk of bone fractures, but it is worth noting. However, this effect is uncertain, and more studies are needed to prove the effect of vitamin K on bone health.

Soybean oil is rich in vitamin E, which has anti-inflammatory properties, and thus is beneficial to skin health, as it reduces damage that can occur to the skin, and may contribute to the improvement of some associated conditions.

Benefits of soybean oil for the body:

1-Lowering cholesterol levels in the blood:

Many studies have found that soy oil can alleviate the symptoms of this disease, as the mixture of soybean oil and avocado oil can contribute to inhibiting the action of some chemicals that induce inflammation and reduce the risk of damage to the cells lining the joints, which are called synovial cells. May help regenerate connective tissue

A comprehensive analysis published in the journal Osteoarthritis and cartilage in 2008 on 664 people with osteoarthritis of both the knee and the hip showed that taking this mixture improved their symptoms of osteoarthritis, but this effect is better in people who suffer from arthritis. knee degeneration.

To see an article on what is the safest plastic to use with food, click on the following link: