Neroli and neroli in perfumery: 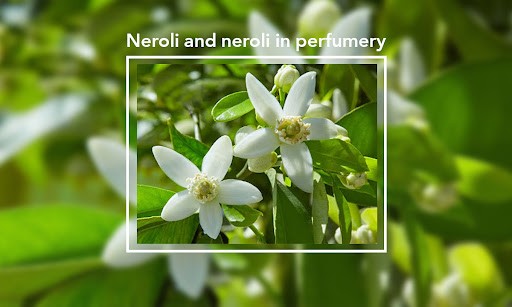 Neroli and neroli in perfumery:

Bitter orange also known as Citrus aurantium, Seville orange, or Bigarade orange (Citrus × aurantium subsp. amara L.) is perhaps the most important citrus substance in perfumery. The plant originated from Southeast Asia, although it does not grow in the wild. Biologists believe that the bitter orange is a cross between a pomelo and a mandarin. Bitter oranges are mainly grown in the Mediterranean. By the way, the famous Italian citrus known as Chinotto used in the production of the soda drink of the same name is of the bitter orange variety, (Citrus x aurantium var. myrtifolia.

Many aromatic substances are produced from bitter oranges. The essential oil is extracted from the leaves, stem, buds and peel of the fruit, but this time let’s compare the fragrance materials extracted from its flowers – neroli and neroli.

What is a neroli flower?

Neroli, also known as neroli bigarade, is an oil that is extracted by steam distillation of the flowers of bitter orange. It is possible that the Arabs knew how to extract the orange flower long before it was introduced to Europe, where they were famous experts in distillation. But the first mention of the distillation of an orange flower was made by the Italian chemist and philosopher Giambattista della Porta in 1563.

Neroli is a pale yellow liquid with a low viscosity, which becomes darker and the oil becomes more stable over time. Unfortunately, neroli is not well stored. The scent of Neroli is intense, fresh, floral, sweet, multifaceted – with notes of citrus fruits, honey, herbs, metallic and spicy notes. Neroli oil does not smell like fresh flowers, as is often the case with all fragrance materials extracted.

Neroli essential oil is named in honor of the Italian city and municipality of Nerola in the city of Rome. At the end of the 17th century, Marie Anne de la Termoy and the Duchess of Bracciano (and Princess Nerola) added bitter orange oil to her bath and perfumed her gloves with it. The perfume named after the princess quickly became popular among European nobility.

Now bitter oranges are grown for oil in North Africa (Tunisia, Morocco and Algeria) and southern Europe (France and Spain.) The oil is also extracted from other citrus flowers – for example, grapefruit, sweet orange (Portuguese neroli) and lemon (“Neroli citronier”), attributed to These oils are commonly called citrus.

The bitter orange tree has an impressive lifespan, with some trees living up to 80-100 years. To get maximum flower yield and therefore fragrance oil, the tree must be at least 12 years old. In southern France, one such tree produces a crop of 5-10 kg of flowers, while in North Africa, where the trees are larger, up to 20 kg of flowers can be harvested from a single tree.

In France, the harvest begins at the end of April or beginning of May, sometimes in June, depending on weather conditions. The flowers are picked only on sunny days, and the harvest lasts 3 to 4 weeks. An experienced worker collects 8-10 kg of flowers per day.

2,5-Dimethyl-2-vinyl hexenal-4 (also known as neroli aldehyde) is specific to neroli oil. Unlike petitgrain (which is an extract of citrus leaves, buds, and petioles), neroli does not contain multi-substituted pyrazines or cis-3-hexenol.

Haitian neroli oil is produced from different types of bitter orange and is distilled with pomelo (Shaddock) flowers, so it has a different aroma. They also use a steam distillation process that affects the quality of the oil. Haitian neroli certainly has its value, but it can hardly be a substitute for French or Tunisian neroli.

From the orange blossom hydrosol, obtained during the distillation process, an absolute is then extracted from orange flower water with non-polar solvents. This Absolu contains a high amount of methyl anthranilate (up to 20%), linalool (as it lacks linalyl acetate), phenylethyl alcohol and phenyl ethyl phenyl acetate, as well as terpineol, geraniol, nerol, nerolidol, eugenol, benzaldehyde, and phenylacetone.

Bases for Neroli fragrances are usually made from substances found naturally in natural neroli oil, such as linalool/linalyl acetate, rose alcohols and acetates, nerolidol and terpineol. They often contain terpene-free petitgrain oil with bergamot, lemon, and sweet orange in the opening. On occasion, C8-C12 alcohols and corresponding aldehydes may be used for the same purpose, as well as hexylcinnamaldehyde and small amounts of benzyl acetate, eugenol, isoeugenol, hydroxycitronellal and methyl benzoate. Optionally, you can also add

Balsams, such as alanzoin, labdanum, myrrh, tolu balsam, benzyl cinnamate, phenyl acetate and trace amounts of large ring musk mix well with all of the above substances and can be used as fixatives in perfume compositions.

Neroli shares a number of compounds with jasmine, narcissus, and rose, and thus blends well with them. Small amounts of natural neroli or neroli base notes can be used in many floral blends, such as acacia, carnation, gardenia, honeysuckle, magnolia, hyacinth, violet, lily of the valley, sweet pea and tuberose.

To view article about Egyptian carob juice and its benefits, click on the following link: